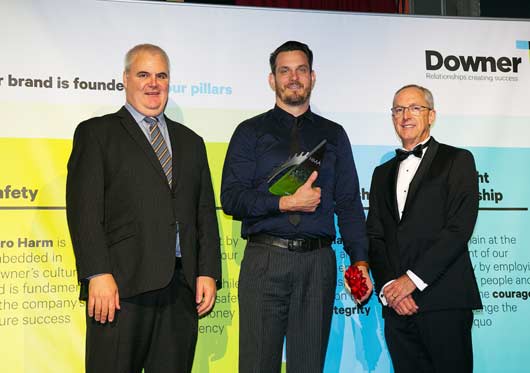 The HMA Baord Award was presented to HMS Group. HMS Group has shown great improvement over the past few years and is a strong manufacturer in the Hunter region.
They have demonstrated a consistent commitment to their customers, their suppliers and the environment. The judges could only congratulate HMS for the significant improvements in their product range and a strong drive to expand the company through the pursuit of export markets.
The judges felt their product range has a huge future in many industries and they are well placed to succeed in these new markets.
The Judges are confident when they say we shall be seeing a lot more of HMS in the future.
HMA Board Award winners also won a trip to an international destination to attend a Trade Fair, Event or other activity that will serve to benefit their company. The trip is sponsored by Helloworld Business Travel Newcastle and HMA. 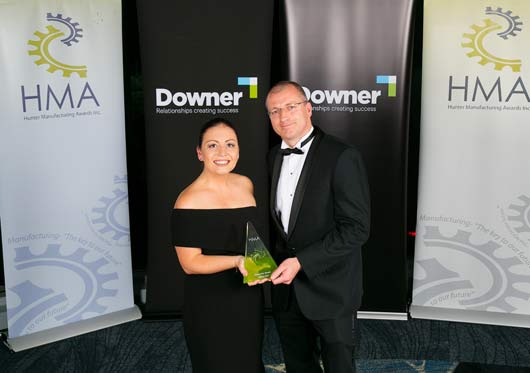 Sponsored by Whiteley Corporation
Jessica Cole from DSI Underground was the winner of the 2017 Rising Star Award. Jessica is a dynamic, inspirational young leader, destined to be a bright light showing the way to others in the Hunter's manufacturing industry for many years to come.
Her passion to make a difference shines through in all that she does, from her dedication to her ongoing professional development, to insights that smash through traditional role boundaries and her ability to take a team of people on a journey to transform the business. Jessica's achievements at DSI have already seen her invited to share her learnings on a national stage and given the responsibility of taking her knowledge and skills to DSI sites in other parts of the world. Her enthusiasm is extremely infectious. She is a sponge for knowledge with a sharp analytical mind.
Jessica has complemented her outstanding work in transforming business systems with a passion for the wellbeing of her work colleagues dedicating her efforts to a range of important initiatives, particularly in the mental health sphere.
Highly commended was awarded to Daniel Hodges, from Moly-Cop. 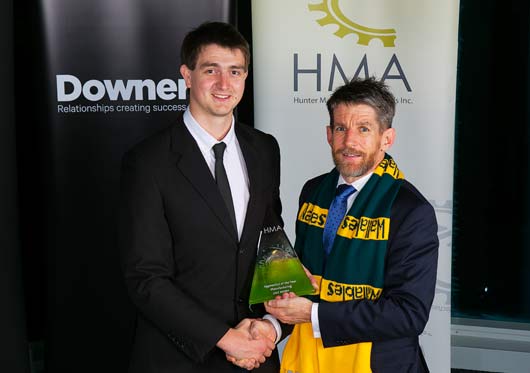 Apprentice of the Year - Manufacturing

Sponsored by BAE Systems Australia
Apprentice of the Year – Manufacturing was awarded to Jake Barry who is employed by Downer Engineering.
Jake completed his Electrical apprenticeship with Origin Energy Eraring Services and gained his qualification with TAFE NSW.
Jake demonstrated outstanding dedication and commitment during his apprenticeship. This is best demonstrated when he designed a new system by himeself to retro fit a fluid coupling control unit, a redesign of the solar and battery supply of the meteorological station and designed and installed an environmental monitoring and control system which tests the water in a run off catchment for pH.
Jake changed his employment to the Downer Group and was chosen to represent the workforce at the Downer Executive Manager Safety Conference in Sydney. Jake has already completed an Advanced Diploma of Electrical Engineering at TAFE NSW and is currently enrolled to study the Certificate 4 in Electrical Instrumentation. In the 8 months since Jake has completed his apprenticeship he has been awarded NSW TAFE Apprentice of the Year for the Hunter and Central Coast, was a finalist in the Hunter Region Apprentice and Trainee Awards and as a result was nominated to represent the Hunter Region in the Excellence in Trade Skills Award at the State Training Awards in Sydney.
Highly commended was Damon Keeping who is employed by HunterNet Group Training and hosted by Austube Mills. 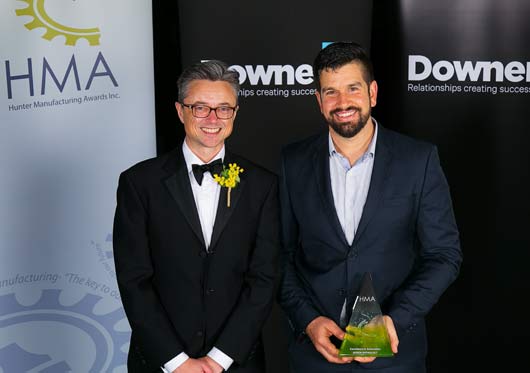 Sponsored by Davies Collison Cave
Excellence in Innovation was won by Design Anthology for their work on the Alpha Surf Ski.
The judges said Design Anthology’s submission was one of the best applications ever submitted for the innovation category.
They commented that it was a very well thought out application showing how innovation can provide a competitive advantage for both manufacturing processes and consumer benefit
Highly commended was awarded to Cobond for their fire retardant and anti-static (FRAS) conveyor belt repair kit. 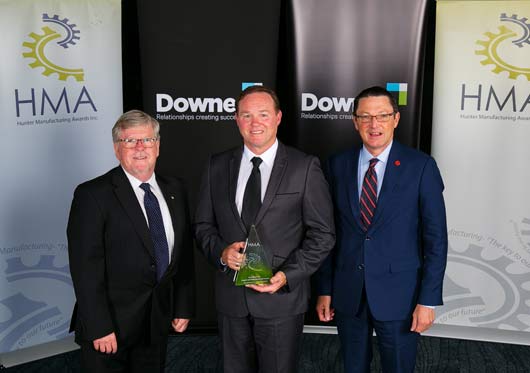 Excellence in Export of Manufacturing Goods

Sponsored by NSW Dept. of Industry
Export of Manufactured Goods Award was awarded to McLanahan whose product offering and strategy for export to China focused on increasing their presence in the agricultural equipment market.
This resulted in increasing export sales in the agricultural and non-agricultural markets. They have clearly highlighted their key objectives and goals, utilising many activities around customising the message for the China market, China website development, implementing a social media strategy, attending exhibitions and conferences, obtaining market research intelligence, and seeking external advice. They have a clear goal of having staff in-market and will be opening their Shanghai office later this year. Connections with Austrade, Australia China Business Council, and the Australian Chamber of Commerce are also smart connections.
Highly commended was Steber International. 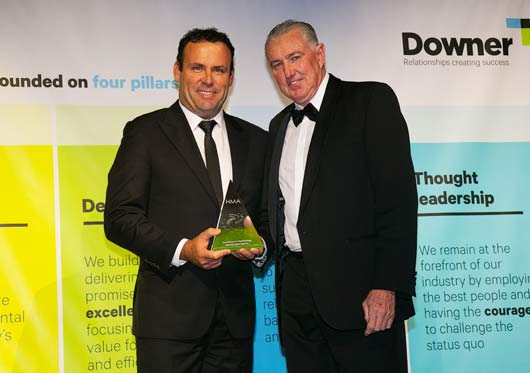 Sponsored by Strata Worldwide (Aust.)
The Technology Award was awarded to Airpak Sheetmetal. Airpak sheetmetal has invested in several advanced machinery to improve their productivity in a declining sheetmetal fabrication industry.
Instead of scaling down, Airpak decided to upscale production. The idea came from their analysis that the current process on manual airduct cutting and shaping is very tedious process and often dangerous.
They embarked on initial technology investment in 2007 on a plasma cutter and TDF machine which proved to be beneficial on output and safety; and followed on with further systematic technology investment.
Their technology acquisition has allowed Airpak Sheetmetal to bid on much larger projects and resulted in annualised growth of 16% over the period of 2012-2017. The company has also more than doubled its workforce from 6 (in 2007) to 23 people (in 2017).
Custom Fluidpower were highly commended for their Shuttle Carmanifold. 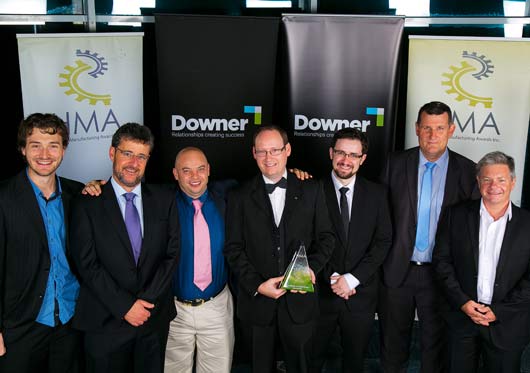 Sponsored by University of Newcastle
Excellence in Product Design award was awarded to Ampcontrol Group – VoiceCom Phone
The judges said that what separates great product design from good product design is simplicity.
Ampcontrol and Tiller Design have stripped down the new VoiceCom phone to its key elements and as a result it’s certainly more than a sum of its parts; achieving this level of simplicity is no easy task.
Ampcontrol have shown an in-depth understanding of the user’s broader requirements. The unit is intuitive to use, includes a host of well-designed features, such as safety overrides, and does not lose sight of the considerations for use in the harsh environment of underground mining.
Ampcontrol have packaged their capable electronic technology with careful consideration to the human interface, and achieved this whilst simultaneously reducing manufacturing cost. The new VoiceCom phone is now 80% lighter than its predecessor and other equivalent phones on the market, and interfaces easily to the current network infrastructure.
Highly commended was Valley Longwall International for their Star Roll. 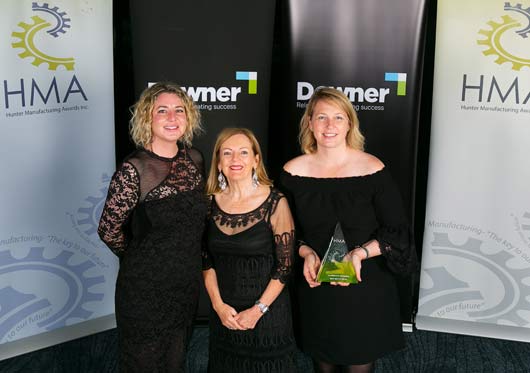 Sponsored by Thurnham Teece
Excellence in Marketing was awarded to Beep Bicycle Bells. Often small companies and start-ups need to be extremely innovative and clear in their marketing in order to succeed given their lack of resources and budgets.
That is certainly the case for Beep who targeted their end users, potential marketing partners and media outlets incredibly effectively.
Their use of PR and social media has been masterful for such a small team. The resulting exposure, growth and return on marketing investment has been outstanding, launching a small local company onto the world stage.
Highly commended was awarded to Design Anthology 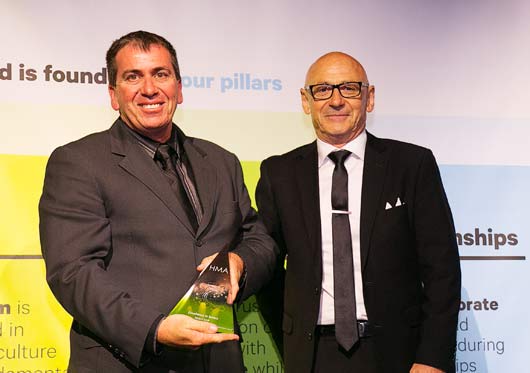 Sponsored by R&R Murphy
The Excellence in Safety was awarded to Moly-Cop for their crane safety video and open days.
A great initiative that has involved not only the workforce but also their families.
Moly-Cop is utilising behavioural considerations by making the employees aware that their actions at work can have a long lasting effect on their families.
It also allows the families to experience what their loved-ones actually do in the workplace. They can then also influence their partners or parents to "BE SAFE" whilst working. Everyone wins.
Highly commended was awarded to Bridon Bekaert for their laser lighting warning system for forklift 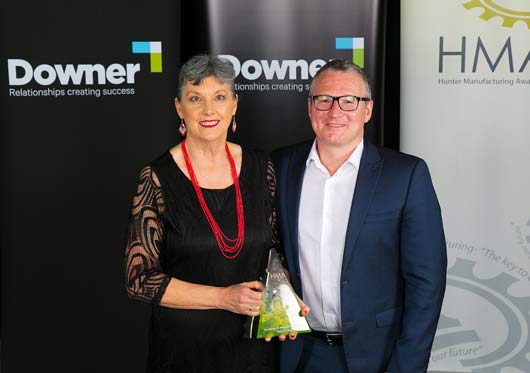 Sponsored by KM&T
Varley Group was awarded Excellence in Manufacturing Process. When Varley were invited to take over a much larger proportion of the NSW Ambulance upgrade project, they took up the challenge knowing the expanded workscope represented a very large step change in output and complexity.
Varley had to put their profit on the line to deliver but they did not hesitate to make the required investment. It is Varley this year that has proudly demonstrated that the “can do” spirit of the Region’s Manufacturing is alive and well. Backed by an excellent submission it was very easy to see that the accolades they have received locally and nationally were well deserved.
Highly commended was awarded to BAE Systems and DSI Underground 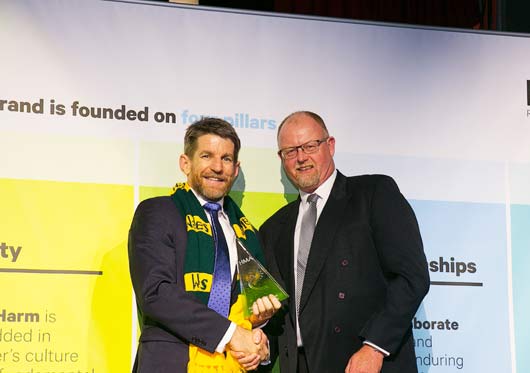 Sponsored by Bridon Bekaert
BAE Systems came away with the Excellence in People and Skills Development Award.
BAE Systems has been a sponsor of the ME program since its inception. Through this program the teaching of Science, Technology, Engineering and Mathematics (usually referred to as STEM) in schools is given context, relevance and status as well as a clearly defined career path into the aerospace industry. Participants are given opportunities to undertake meaningful work experience to help prepare them for a world of work.
The positive exposure of STEM subjects and STEM based careers helps attract a wider range of young people to the industry, ensuring a skilled manufacturing workforce for BAE Systems and the whole region. 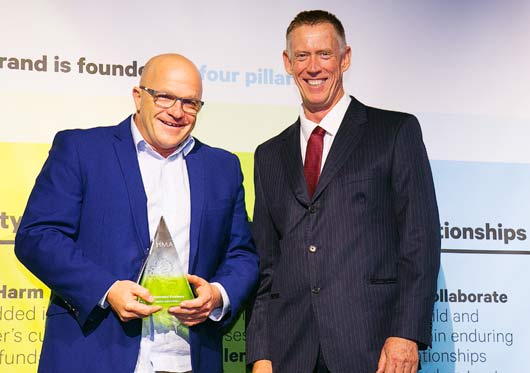 Sponsored by Quarry Mining
Environmental Excellence was awarded to Norris Industries. The applicant has identified a range of environmental aspects associated with their manufacturing operation over which they have influence.
It is commendable that they have sought assistance through membership of and participation in industry programs such as the NSW Sustainability Advantage Program.
Continuous improvement in efforts to reduce their manufacturing environmental footprint is evident, together with flow on of benefits to their customers. 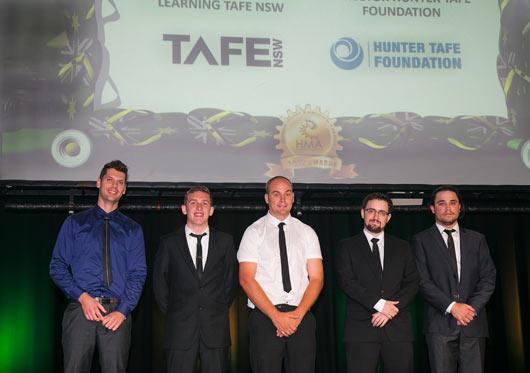 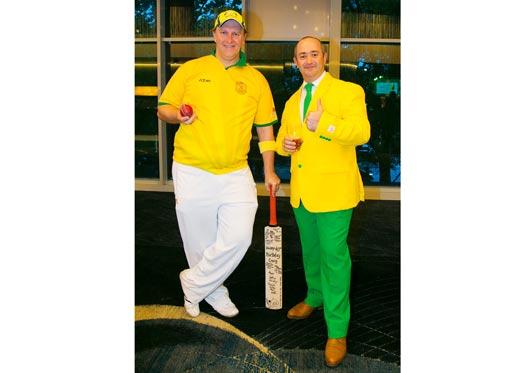 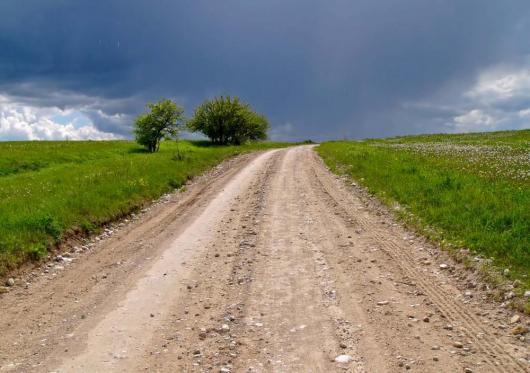