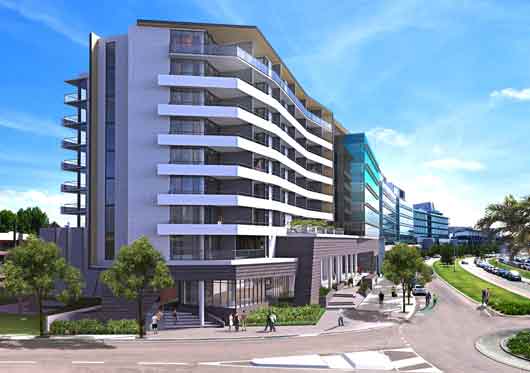 One of Newcastle’s largest media companies, Southern Cross Austereo (SCA) Newcastle will be moving in 2017 and taking up tenancy in Newcastle’s popular business and entertainment precinct – Honeysuckle.
KOFM and NXFM have been based in the building on the Pacific Highway in Charlestown since 1988 and 1993 respectively, and Southern Cross TEN joined them in 2014. All of SCA Newcastle will move to 18 Honeysuckle Drive into purpose built offices which will include state of the art on-air and production studios, and a much better view!
Southern Cross Austereo CEO Grant Blackley, SCA Head of Regional Media Rick Lenarcic, and SCA NSW Regional General Manager Ashley Myatt hosted a staff function on 22 June at the Squire’s Maiden at Honeysuckle, to announce the new building to the staff.
To coincide with this, the construction of the DOMA Group owned building has reached a milestone in pouring the last slab of concrete in the building.
SCA CEO Grant Blackley says: “Newcastle is one of SCA’s most successful media centres Australia-wide. Our staff here perform exceptionally well, and I’m delighted to announce they will be rewarded with top floor, harbour views in one of the most dynamic precincts in Newcastle”.
Chris Farrington, Development Manager of DOMA Group said “The signing of Southern Cross Austereo reflects the overwhelming interest we’re receiving from national tenants looking to move into quality office accommodation in the honeysuckle precinct. Today marks a significant milestone for our construction team with the last slab of the concrete structure being poured. We anticipate the tenants fitout will be completed in the first quarter of 2017 and they will move in shortly after.”
Bob Hawes, General Manager of Hunter Development Corporation said “The Hunter Development Corporation is pleased to see this project reach a significant construction milestone. With major tenants secured and construction advanced, this project is contributing to the Honeysuckle urban renewal project and the revitalisation of the wider city centre.”