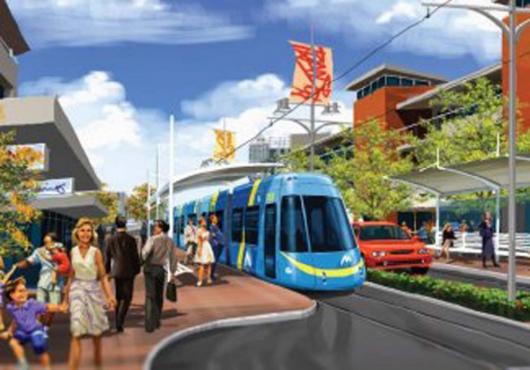 The Newcastle Light Rail route has been decided with an announcement made at the end of May. The route decided upon travels east from the new Wickham transport interchange along the existing rail corridor, before moving south to connect with Hunter Street and Scott Street, terminating at Pacific Park.
Lord Mayor Jeff McCloy has said he is happy with the decision and is pleased that plans are progressing. “The announced alignment should catalyse business and open up spaces for wider community benefit for a new city. The Scott Street section allows the east end to flow easily to business and residential in the Urban Growth/GPT project. The Scott Street option means greater people circulation than the mall option. Plus light rail vehicle frequencies can increase with changing city density. The route also goes past the law and university precinct in Hunter Street.”
Minister for Planning Pru Goward said “The route strikes the best balance in providing a quality transport outcome for Newcastle and also allows the city and its waterfront to be reconnected and revitalised.”
The State government has allocated $460 million to this project which includes $340 million that will come to the city through the sale of the Newcastle Port. Work will start on the removal of the existing heavy rail line before the end of the year.